Your strongest thoughts will determine the direction of your life.

Philippians 4:8-9
8 Finally, brothers and sisters, whatever is true, whatever is noble, whatever is right, whatever is pure, whatever is lovely, whatever is admirable—if anything is excellent or praiseworthy—think about such things. 9 Whatever you have learned or received or heard from me, or seen in me—put it into practice. And the God of peace will be with you.

The problem is the pattern.

What are some unhealthy patterns you have developed in your life? 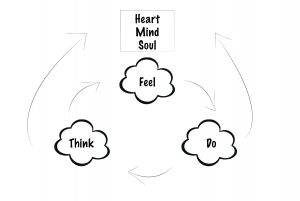 2 Corinthians 10:3-5
3 For though we live in the world, we do not wage war as the world does. 4 The weapons we fight with are not the weapons of the world. On the contrary, they have divine power to demolish strongholds. 5 We demolish arguments and every pretension (especially those that come from within…) that sets itself up against the knowledge of God, and we take captive every thought to make it obedient to Christ.

John 8:44
44 You belong to your father, the devil, and you want to carry out your father’s desires. He was a murderer from the beginning, not holding to the truth, for there is no truth in him. When he lies, he speaks his native language, for he is a liar and the father of lies.

Identify the lie.
Replace it with truth.